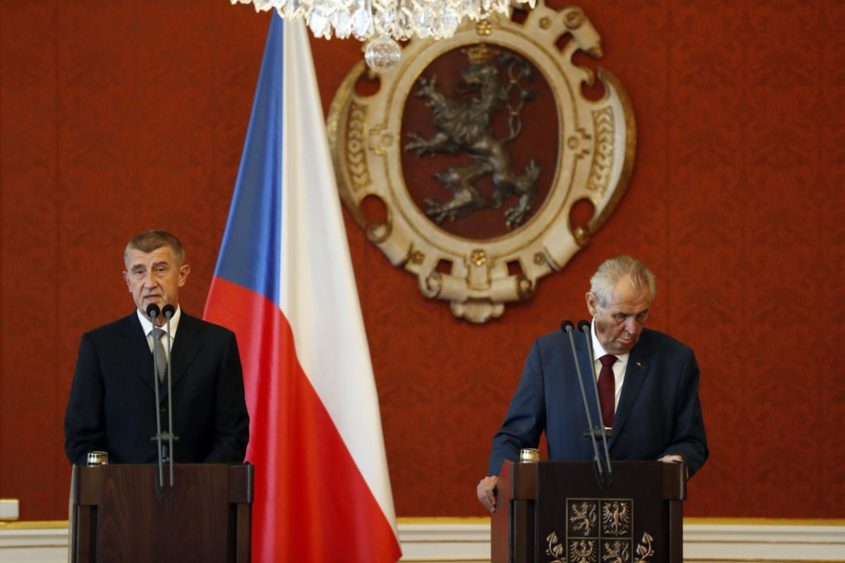 Babis’s ANO single-party minority government resigned after it lost a confidence vote in the Chamber of Deputies, the lower house of parliament, in January, but it keeps ruling pending the formation of a new minority cabinet on which ANO agreed with the Social Democrats (CSSD). It is to be kept afloat by the Communists (KSCM).

After the appointment ceremony today, Zeman asked Babis to submit a draft lineup of his new cabinet within an adequate period of time, so that he can acquaint himself with the cabinet members. He wished Babis that his new cabinet win parliament’s confidence.

Zeman did not rule out that the cabinet may be appointed in late June.

If so, he would expect the parliament’s vote of confidence in it to take place in the first, second or third week of July.

Babis said he will wait for the result on the CSSD’s ongoing internal referendum on whether to join the government with ANO. Afterwards, he wants to meet Zeman and form a cabinet quickly.

Babis later told journalists that he has asked Zeman for a meeting on June 16 or 17, which is the weekend in the wake of the planned release of the result of the CSSD’s ongoing referendum on the government project. He will submit a complete cabinet lineup to Zeman, he said.

The cabinet might be appointed in the week beginning on June 25, and it might apply for parliament’s vote of confidence on July 11, Babis said.

He said he expects a coalition pact to be signed still before the confidence vote and wants all ANO and CSSD lawmakers to add their signatures to it.

On the other hand, ANO and CSSD deputies are not bound to sign the cabinet’s agreement with the KSCM on the latter’s toleration of it. This agreement will not bind the cabinet to vote for the KSCM’s proposals in parliament, Babis said.

Zeman appointed Babis head of government before the end of the the CSSD referendum on the two-party government, the result of which is to be released on June 15.

He thereby gave up his previous demand that Babis must guarantee a majority in the Chamber of Deputies before his second appointment.

If the CSSD approves its entry into the probably 15-seat government, it will have five ministers in it.

CSSD chairman Jan Hamacek would be the interior minister. The Labour and Social Affairs Ministry would be led by its former deputy head Petr Krcal, the Agriculture Ministry by Czech Federation of the Food and Drink Industries President Miroslav Toman and the Culture Ministry by Olomouc Mayor Antonin Stanek.

The fifth ministry to go to the CSSD is the Foreign Affairs Ministry, which the CSSD wants to be headed by MEP Miroslav Poche. Zeman, however, criticises Poche for having supported the acceptance of migrants by Prague.

ANO has not yet presented its candidates for ministers. Babis said today a definitive decision on them is yet to be made.

Zeman would not comment on the ministerial candidates for the media today. He said he wants to discuss the nominations with Babis.

He did not rule out coming to the Chamber of Deputies again to personally support the nascent cabinet before the confidence vote. He said he likes the cabinet’s policy statement as agreed upon by ANO and the CSSD, and would gladly express support for it.

After his appointment today, Babis promised to fight for the Czech national interests on the EU soil, to fight against corruption, money wasting and in support of an effective state.

“I will be listening to citizens and fighting for their better life. I will fulfil my election promises,” Babis told journalists.

It seems that the longest time will pass between the general election and the formation of a government with the lower house confidence in the history of the Czech Republic, founded in 1993.

So far, the Czech Republic was waiting the longest time for a government with confidence at the end of 2006 and the beginning of 2007 when Civic Democrat (ODS) Mirek Topolanek succeeded in winning the lower house’s confidence only with his second cabinet, 230 days after the elections.

Today, 228 days have passed since the end of the last October general election.