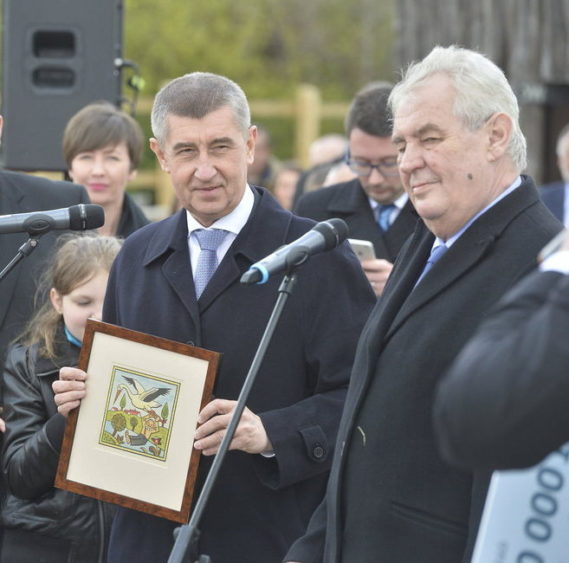 2006 – Reconstruction work turning a dilapidated farm near Benesov, central Bohemia, into a conference centre started in 2006, architect Jiri Javurek told iDnes.cz news server in 2012. In February 2006, the Imoba company, which was part of the huge Agrofert concern of billionaire Andrej Babis, owned the farm.

December 1, 2007 – ZZN AGRO Pelhrimov, a limited company from Agrofert, turns into a joint stock company of the same name with bearer shares. All the shares were owned by the ZZN Pelhrimov firm.

February 2008 – ZZN AGRO Pelhrimov changes its name to Farma Capi hnizdo, the shareholders are anonymous from this moment.

August 20, 2008 – The Committee of the Regional Council of the Regional Operation Programme (ROP) Central Bohemia approves a subsidy of 50 million crowns for the Capi hnizdo (Stork Nest) project.

June 2010 – The farm is finished and opened. The Czech media connected the farm with Babis who dismissed the idea that he was the owner.

September 2010 – Czech weekly Ekonom writes about the subsidy for the Capi hnizdo firm. The firm was considered a small business and if it were interconnected with a bigger business it would not have been granted the subsidy, the Central Bohemian ROP representatives confirmed to the weekly.

February 2011 – An audit reveals that the Capi hnizdo farm asked for one payment in 2009 before it paid the given invoice. The firm was fined six million crowns. In 2012, most of its fine was forgiven.

October 2013 – Babis tells weekly Respekt: “I have nothing in common with Capi hnizdo… I don’t know who owns it.” It was shortly before the general election in which Babis’s ANO movement, a newcomer in politics, scored a big success that opened a path to the government for it. Babis, who was finance minister from January 2014, told Respekt he lent the Capi hnizdo firm 400 million crowns and that the firm leased one building to him.

November 2013 – According to Babis’s statement from March 13, 2016, the Agrofert group took over the Capi hnizdo farm, which was “loss-making and overburdened with debt,” this month.

June 2014 – The Farma Capi hnizdo firm ceases to exist when bearer shares are banned by law. It merged with Imoba, which administers the real estate of Agrofert.

December 29, 2015 – Aktualne.cz server writes that the police start checking the circumstances under which the subsidy for the Capi hnizdo farm were granted.

March 2, 2016 – Neovlivni.cz writes the European Anti-Fraud Office (OLAF) launched an official investigation into the circumstances under which Agrofert gained 50 million crowns from the EU funds.

March 13, 2016 – Babis says he knows who owned the Capi hnizdo when the subsidy application was submitted, but he refuses to give any name. Three weeks later, he told a special parliamentary session that his two adult children and the brother of his current wife owned the farm then.

May 24 – Finance Minister Babis leaves the government, following pressure from Prime Minister Bohuslav Sobotka (Social Democrats, CSSD) as well as from other parties. His unclear property situation, dubious financial transactions and the Capi hnizdo case were among the reasons for his dismissal.

May 26 – An auditor’s report of the Finance Ministry on the Capi hnizdo farm is released on an anonymous Twitter account, concluding that the interconnection between Capi hnizdo and Agrofert at the time of the subsidy application can be neither proved nor ruled out. Audio recordings of Babis including controversial statements were released by this Twitter account previously.

August 10 – The police submit an application for the release of Babis and ANO deputy chairman Jaroslav Faltynek for criminal prosecution over a suspected EU subsidy fraud to the lower house of parliament.

September 6 – The lower house releases Babis and Faltynek for prosecution.

October 9 – The police accuse Babis and Faltynek, who both plead innocent. Babis filed a complaint against the accusation.

October 23 – The police accuse 11 people in the Capi hnizdo case. Babis said his wife, two children and his brother-in-law were among the accused.

November 21 – The police again send a request for the release of Babis and Faltynek for prosecution to the lower house.

December 20 – The OLAF announces that it has completed its investigation related to the EU subsidy for Capi hnizdo. The OLAF report was sent to the Czech Republic.

January 2 – Babis says Agrofert complained with the European ombudsman and the EU Court of Justice about the investigation of the subsidy for the Capi hnizdo farm led by the OLAF.

January 8 – Daily Hospodarske noviny (HN) releases details of the OLAF report on its website. Untrue data were presented in the subsidy application for Capi hnizdo, the report said.

January 10 – Lower house session meets to take a confidence vote in Babis’s minority government, but the vote eventually is not taken due to the mandate and immunity committee which is still dealing with the case of Babis and Faltynek.

January 11 – The complete Czech translation of the text of the OLAF report on Capi hnizdo is released by Aktualne.cz and HN.

January 14 – Babis says the OLAF is biased and the Capi hnizdo case is politicised both in Prague and Brussels.

January 16 – Babis says before a mandate and immunity committee meeting that he and Faltynek will ask the lower house to release them for prosecution. He added that the case was fabricated by his opponents who want to remove him from top politics.