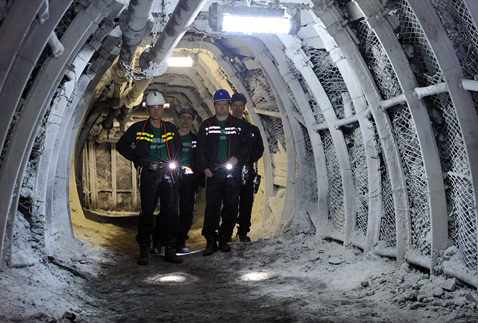 OKD was sent into insolvency in May 2016. Since last week it has been in the state’s hands again as its active mines were taken over by Prisko company.

Louda said the 2017 business result was “very positive,” being a piece of good news for OKD’s further performance.

Server ihned.cz wrote today that growing prices of black coal are behind OKD’s good result. It pointed out that OKD sustained a Kc1.22bn loss in 2016, while a year earlier its loss reached nearly Kc7bn.

OKD also repaid a Kc150m loan it was provided by Prisko for financing its operations in 2016.

With supplier companies, OKD employs some 9,500 people in total.

OKD’s liquidity is sufficient to finance potential unexpected events and a phaseout of ineffective mines, Louda said in a report on OKD’s performance published in the insolvency register.

The company got into serious financial trouble due to falling prices of coal and excessive debts, and it filed for insolvency. More than 550 creditors lodged their claims whose value topped Kc23bn. According to Louda, most of the claims are not valid.

The creditors, the insolvency administrator and the court gave the green light to OKD’s reorganisation within which the mines were transferred to the state that paid nearly Kc80m for that.

Claims against former owners and debts created before OKD got into trouble remained in the original company that changed its name to Sprava pohledavek OKD (asset management company).

Marian Klasek, board chairman at Prisko and board member at OKD, told CTK last week that when taking over the coal miner, Prisko pledged to create Kc4.9bn worth of reserves to cover the mines’ phaseout until 2026.

Under the original plan, Darkov and Lazy mines are to be closed this year, CSA mine in 2021 and CSM will be the last mine to shut down in 2023, their liquidation to continue for another three years.