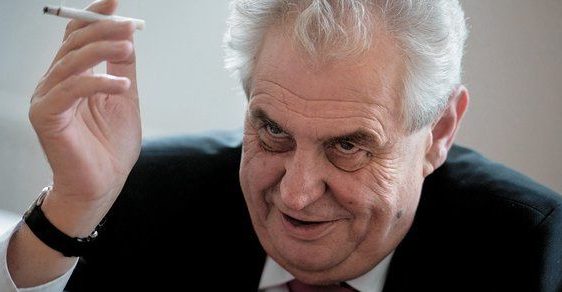 Zeman expressed the hope that the deputies would vote the confidence in the government.

He said this would be a government of all citizens.

He said he wished that the leaders of ANO, the Social Democrats (CSSD) and the Communists (KSCM) managed to end the protracted talks.

Zeman said as a born optimist he would like to express the hope that the Chamber of Deputies would vote confidence.

He stressed that the government policy statement contained a long-term investment programme.

Zeman said subjectively, he would place in the first place the repair of heritage, but objectively, the Czech Republic primarily needed investments in its infrastructure and energy.

He said it was a mistake that the plans in the sphere of infrastructure were more precisely defined than those from the sphere of energy.

Zeman said he was for the construction of a canal linking the Danube, Odra (Oder) and Labe (Elbe) rivers.

He said he believed the project would be launched during his life-time.

Zeman criticised a “confused work lacking a concept” in energy.

The Czech Republic still does not know whether it will complete the nuclear plants in Dukovany and Temelin and who will pay for the project, whether it will be the CEZ state-controlled power company, which is a good idea, Zeman said.

He said he was against the EU effort to increase the proportion of renewable sources in the production of electricity.

Zeman said he hoped the Czech diplomacy would succeed in this sphere and stop the effort.

Zeman said he had agreed with Babis and CEZ director Daniel Benes that CEZ would give a lawyers’ team at the disposal of the Government Office for free. It will look for solutions to the problem with the support of renewable sources.

Zeman said the state was wasting on the support of renewable sources 48 billion crowns annually, which was a mistake of the past governments, past parliaments and the former “green madness.”

Zeman said he could see “tremendous sources” in economising and fight against squandering. The number of civil servants and their salaries should not be raised.

At the close of his speech he said why he was speaking about “our” government.

If the Chamber of Deputies expresses confidence in the government today, it will be our government, the government of all citizens of our state, irrespective of its composition, Zeman said.

The minority government is comprised of ANO and the Social Democrats. The Communists have pledged to support it in the confidence vote.

Tens of demonstrators were standing outside the parliament building who protested against the government’s support by the Communists.

They were holding the photographs of the people executed by the Communists in the 1950s.

After Zeman came to the Chamber of Deputies, he called on the journalists to listen to his excellent speech that is to relate to the government policy statement.

When his car came, one of the demonstrators shouted “Shame on Zeman!” Zeman reacted by the words “Shame, shame, I absolutely agree with you.”

The protesters warned of the government to be backed by the Communists for the first time since the 1989 overthrow of the Communist regime . One of them brought a symbolic bloody Czech flag.

The demonstrators were addressing the arriving lawmakers since early in the morning. They were offering them the Czech tricolor as a symbol of voting against the government or a doughnut if they want to support the government.

The deputies for TOP 09 walked out before Zeman’s speech. “We did not want to listen to Zeman recommending that we should support a Communist government for which he shares responsibility in the confidence vote,” Miroslav Kalousek, the head of the TOP 09 deputy group, said.

The Christian Democrats (KDU-CSL) brought an anti-Communist banner. It featured a crossed Communist star with the hammer and sickle, the symbol of the Soviet Union, in it.

“The Christian Democrats vote against the government with the Communists!” the banner said.