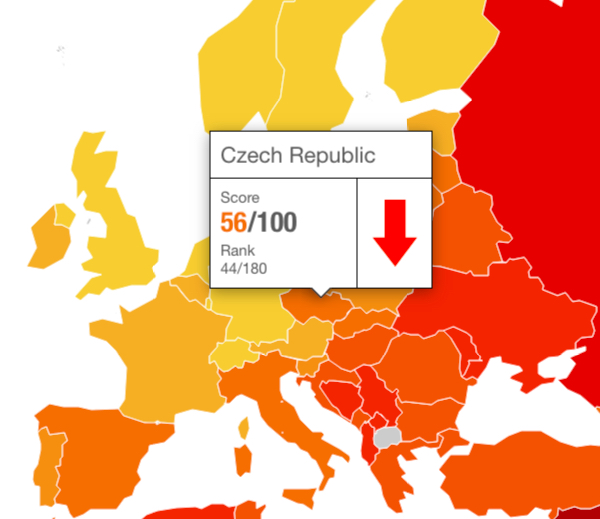 Corruption in the Czech Republic is worsening, and Prime Minister Andrej Babis is to blame, Transparency International (TI) says.

Czechia scored 56, falling six places in 2019 to 44th. The country ranks 19th in the European Union, where the average score is 66.

“In the Czech Republic, recent scandals involving the prime minister and his efforts to obtain public money through EU subsidies for his company highlight a startling lack of political integrity.”

David Ondracka, the Director of Transparency International’s Czech branch, said, The Czech Republic has a corruption problem due to the growing influence of oligarchs…The reason for the fall of the Czech Republic in the CPI is the privatization of the state by oligarchs, shoddy work by regulators, and a lack of transparency in allocating subsidies.

Mr. Babis called the ranking absurd and meaningless. He argued no corruption has occurred during his time in office. Babis told reporters that Mr. Ondracka is waging a personal vendetta against him.

The Prime Minister has long been at odds with the Czech branch of TI, which first reported his alleged conflict of interest. He calls it a corrupt organization with dubious funding.

Despite the current problems, TI sees positive signals in the Czech Republic. “There is an active civil society that is holding back some excesses that could occur,” Ondracka said.