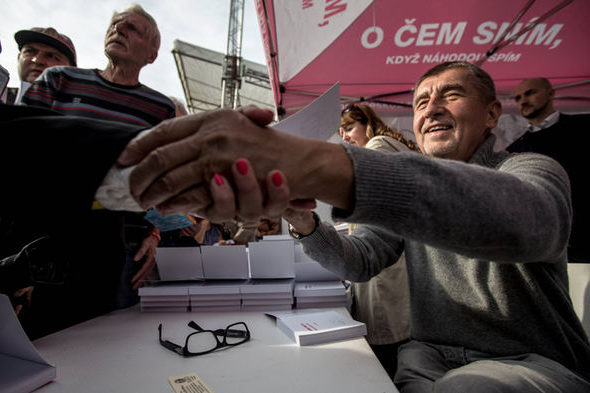 Fiala presented his party’s candidates and said the Bohemian and Moravian capitals, Prague and Brno, ran into numerous problems under the control of ANO in the past four years.

Referring to the ODS’s priorities, former Prague mayor Bohuslav Svoboda, who leads the ODS in the elections now, mentioned the still incomplete parts of the Prague road ring and people’s bad access to housing.

“We will strive to complete both [the inner and the outer] rings, push through the introduction of an all-Prague parking zone and earmark money for flat construction,” Svoboda said.

“We would not offer paradise on the Earth,” said ODS deputy chairwoman and number two candidate in Prague Alexandra Udzenija.

The ODS is entering the elections with proposals for an accessible and user-friendly public administration, quick development of effective infrastructure and public services, and support for colourful life in towns and villages, Fiala said.

Hinting at PM Andrej Babis’s ANO movement and its election billboards with individual candidates saying they have the prime minister’s phone number, Fiala said this way of governance has proved wrong.

“This is a world we should reject because it does not work. This is evident in Prague and Brno, where not the slightest progress has been visible in the past four years,” Fiala said, hinting at ANO as a movement fully depending on billionaire PM Babis as its leader.

He drew a parallel between ANO’s billboards and a once-well-known communist-era soap opera from the life of communist comrades.

Since 2014, Prague and Brno have been headed by Adriana Krnacova and Petr Vokral (both ANO), respectively. Unlike Vokral, Krnacova does not seek re-election now. ANO has fielded entrepreneur Petr Stuchlik as its number one candidate in Prague.

A total of 13,853 ODS candidates are running for seats in 845 towns and town districts.

Together with the local elections, the elections to one third of the Senate, the upper house of parliament, will be held next month.

The ODS will seek an election result to create a safeguard against the “semi-communist” leftist coalition that controls the Chamber of Deputies and Prague Castle (the seat of the president), Fiala said.

The country has a minority cabinet of ANO and the Social Democrats (CSSD) that has been kept afloat by the Communists (KSCM).

In the Senate elections, in which upper house seats for 27 election wards will be contested, the ODS has fielded candidates in 24 wards.